This here is the monument to Bess – up near Flock House. Bess was one of more than 10,000 horses New Zealand sent overseas during the First World War. Yet, only one of four that made it back home.

A photograph of Bess with a wounded New Zealand Mounted Rifles trooper, Clutha Mackenzie, inspired the erection of a memorial to ‘commemorate the deeds of Australian and New Zealand mounted troops in the Palestine campaign’ in Port Said, Egypt. This memorial was relocated to Albany, Western Australia in 1956.

Bess was one of more than 1000 horses donated to the government for military purposes when the war broke out. The four-year-old black thoroughbred, originally named Zelma, was allocated to the Wellington Mounted Rifles Regiment and selected by Captain C.G. Powles, who renamed her Bess. She served him throughout the war in Egypt, Sinai, Palestine and France. After her return to New Zealand in 1920, Bess helped Powles perform his duties as commander at the GHQ school at Trentham and then headmaster at Flock House, an agricultural training school for the dependants of war veterans.

Bess died on land near Flock House in 1934. Powles buried her at this site and erected the memorial. Square in shape and topped by a large rock, the memorial has two plaques. One lists the countries in which Bess served during and after the war. The other bears a text in Arabic: ‘In the Name of the Most High God’.

Bulls Museum have a permanent display on Bess and the other horses, including King's saddle. 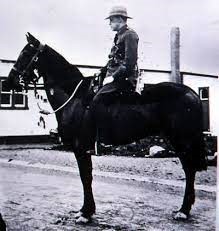